In “Realism in foreign policy is undercut by utopian gestures” (6/12/18), Brandon Weichert argues that the Leahy laws should be repealed.  My first suggestion is that he read the laws, which are as concise as they are clear, because either he has not done so or he knowingly misstates their purpose and effect.

Mr. Weichert incorrectly states that “the provision,” which is actually two similar but not identical laws that apply, respectively, to the Department of Defense and the Department of State, “bans the United States government from rendering military assistance of any kind to countries with an unsavory human rights record,” and that “[should] the United States fully adhere to the Leahy Law and only support democratic regimes, it would find itself losing out in the grand, geopolitical game.”

None of that is accurate.  Far from being the blunt instrument described by the author, the Leahy laws neither prohibit U.S. assistance for entire countries nor limit it to only “democratic regimes.”  What the laws actually do is require the Secretaries of State and Defense to suspend U.S. assistance for an individual unit of foreign military or police forces if they have credible information that such unit has committed a gross violation of human rights, such as murder of a civilian, torture, or rape.  However, assistance to the unit is suspended only if the foreign government fails to take steps to punish those who commit such crimes.

In the rare instances that U.S. assistance is suspended for a unit, assistance for the rest of the country’s security force remains unaffected.  Over 90 percent of all cases submitted for vetting are approved annually.  In exceptional cases when the U.S. withholds assistance for an entire country, it is due to a policy decision or another provision of law, not the Leahy laws.

I agree with Mr. Weichert that cutting off assistance to an entire country is rarely in our interest.  But the Leahy laws provide a far more targeted approach.  When our government is supporting the Afghan National Security Forces to reestablish control in former Taliban strongholds, ensuring that U.S. taxpayer money is not used to support units known to have raped children, while continuing to support units not involved in such acts, hardly seems like “idealism,” or a “utopian gesture.”  Requiring accountability for such crimes is a pragmatic way to enhance the professionalism of our partners, which helps build their legitimacy and ensures that the U.S. is not associated with such acts.

Whether our partners are democratic, authoritarian, or otherwise, it is a mistake to hide behind so-called “realism” as an excuse for tolerating U.S. support for, or acceptance of, war crimes or other heinous offenses.  Realists recognize that government repression is a leading risk factor for radicalization in many countries, and it is in our interest to help prevent it.  Are we naïve enough to believe that the abuses and repression of today will lead to stability tomorrow?  History has taught us otherwise.

Any law is only as effective as its implementation.  Since 1997, the Department of State and Department of Defense have made great strides in institutionalizing the Leahy laws.  But more can be done.  We need to ensure that the laws are understood by our partners and by our own officials, and implemented proactively and effectively; improve the quality of the information used for vetting units of foreign security forces; and encourage and facilitate accountability for abuses, including so we can resume assistance to previously suspended units in partner countries to achieve our common objectives.

Our interests are not served by misrepresenting what the Leahy laws do or creating a false dichotomy between human rights and national security, nor does history support such a distinction.  Far from impeding our ability to advance U.S. interests, the Leahy laws have provided an effective example of how U.S. national interests can be pursued overseas in a manner that promotes the rule of law and is sustainable over the long term. 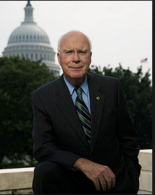 Senator Patrick D. Leahy (D-VT) has been a member of the United States Senate since 1975. He is currently the Vice-Chair of the Senate Appropriations Committee, as well as the senior-most member of the Senate Judiciary Committee, and the Senate Agriculture Committee. On top of these duties, Senator Leahy serves as the Ranking Member of the Appropriations Subcommittee on State Department, Foreign Operations and Related Programs. Leahy ranks first in seniority in the United States Senate.

View all posts by theweichertreportguest