Since 2013, analysts have speculated as to whether the People’s Republic of China would intervene in the Syrian Civil War to shore up fellow autocrat, Bashar al-Assad, the way that the Russians (and Iranians) had intervened. After all, since the Libyan Civil War which ousted nominal American client Muammar Gaddafi, the Chinese had been increasingly active in sending their forces into the ongoing “War for the Greater Middle East.”

In fact, there was a small controversy in the U.S. presidential election of 2016 when then-Republican presidential hopeful, Dr. Ben Carson, asserted that China had military units operating in Syria buttressing Assad’s Syrian Arab Army.

While that proved to be untrue, the fact remained that since 2011, the Chinese military was becoming increasingly active outside of its traditional sphere of influence in the Asia-Pacific.

Earlier this week, the Asia Times Online reported that Beijing was officially mulling over whether to deploy forces into Syria to support Assad’s forces seeking to recapture the eastern Syrian town of Idlib.

Given China’s commitment to building up President Xi Jinping’s Belt-and-Road Initiative–as well as China’s decision to swing westward as the United States haphazardly pivots toward Asia–Chinese intervention in support of Assad is a natural evolution for Chinese foreign policy. Plus, China is believed to have potentially small special forces units to combat the Uyghur-Chinese who fled China to join Salafist terror networks fighting in Syria.

For instance, according to Al-Araby, the Chinese had been planning to deploy their lethal special forces group–nicknamed the “Night Tigers” last Fall to support Assad’s forces.

Look to Africa For Inspiration

Let’s wind the proverbial clocks back a few years and look at the progression of Chinese expansion. In 2008, Western media outlets started noticing how the Chinese government was moving heavily into Africa (to the point that The Economist printed a famous cover-story entitled “The New Colonialists?” with an image of a Chinese soldier, waving a red Chinese flag, riding on the back of a camel). Chinese influence in Africa–a resource-rich territory–has exponentially grown over the last decade.

In conjunction with the growing Chinese influence in far-flung Africa, beginning in December of 2008, the Chinese deployed a naval task force to conduct anti-piracy patrols in the Gulf Aden (this is a strip of water which touches the coast of Somalia. The Chinese naval presence became a staple of international military operations in the Gulf of Aden since then.

China’s development of Africa is a snapshot, then, of what it intends to do throughout the whole of Eurasia. Or, as Howard French, the man most associated with researching what China is doing in Africa, told the Financial Times last year:

“Africa has been a field where China can try various things in a very low-risk environment. Africa has been a workshop of ideas that now have a much bigger scale and strategic significance.” 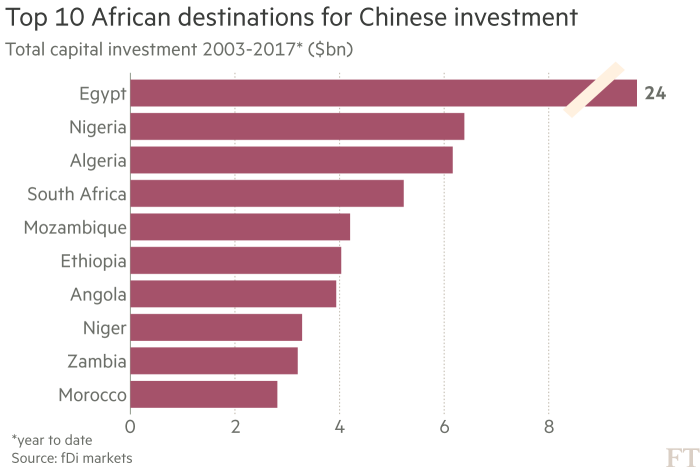 As the Chinese expanded their economic linkages in Africa and increased the level of their naval patrols in the Gulf of Aden, Beijing also redoubled its commitment to deploying its forces under the imprimatur of the United Nations.

The People’s Liberation Army suffered its first overseas casualties in recent years as part of a UN peacekeeping force in Africa.

To allow for greater Chinese access to Africa and South Asia, China is building naval and air bases in Gwadar and Jawini in Pakistan. Because of China’s activities there, many are concerned that China is intent on replicating its South China Sea island-building project in the Indian Ocean, to not only complicate Indian grand strategy but to also exert firmer control over its holdings in Africa.

Also, according to the Lowry Institute, China is making inroads to acquire a military presence in Tanzania.

During the 2011 Libyan Air War, the Chinese made a big show of moving one of their frigates off the coast of Libya, in order to evacuate 12,000 Chinese nationals living in Libya. It would not be the last time Chinese warships operated so far from their home waters. In 2015, China conducted a similar evacuation of their personnel in Yemen. And, more recently, a few Chinese warships conducted a joint-military exercise with Russia’s Baltic Sea fleet.

Also the Chinese have established their own drone base in Djibouti to rival the major American drone base in Ethiopia. As commerce linkages increase in a region, a country’s military presence there expands also. China has also identified countries like Kenya as key transit points in their ambitious Belt-and-Road Initiative that aims to link together the whole of Eurasia along Chinese-dominated trading routes.

As Africa goes to China, so goes the rest of Eurasia.

Moving to the Middle East

Toward that end, the Middle East plays a pivotal role.

China is a major purchaser of Iranian and Iraqi oil sources. Further, the Chinese desire to push beyond the Middle East and create direct connections with states that sit on the all-important Mediterranean Sea.

As I reported recently at this website, the Chinese are keen on purchasing access to the port of Piraeus (and other ports along the Mediterranean and Adriatic Seas), as a means of gaining strategic access to both the European market, as well as to complicate American military movements in what once considered a second American lake (behind the Caribbean Sea).

Much like the Russian government, the Chinese government desires access to the warm water ports of the Mediterranean. Should the Chinese military be deployed in any capacity to buttress Assad’s war against the head-chopping Syrian rebels (most of whom are Salafi-terrorists), the move would be the first of many toward the Chinese acquiring a greater and more permanent presence in the Mediterranean and the Greater Middle East.

Whereas the United States’ much-ballyhooed “Asia Pivot” fell flat (and has since been replaced by the Trump Administration’s trade war with China), the Chinese have been exacting in their aims to swing West. Beijing has methodically built up its presence and expanded its military presence outward, as any rising empire throughout history has done.

Although the Chinese GDP is smaller than the United States’ GDP (at around $11 trillion), they are still the second-largest economy in the world that remains poised to displace the United States as the number one economy within the decade.

Just look at how spasmodic the Australian response to China’s rise has been. Here is a country, Australia, that is directly threatened by the growing Chinese military threat. Yet, Canberra has taken a one-step-forward-two-step-backward approach to its relationship with China.

Yes, Australia allowed for U.S. Marines to be stationed in Darwin. And, yes, the Australian Navy has begun taking part in naval exercises along with the United States Navy. However, Canberra’s foreign policy and economic policy elite continue casting doubt on these moves.

Rather than standing up to China, influential folks in Australia, like the geostrategist Hugh White, insist on Australia playing nice with China. In fact, recently, Canberra invited Beijing to partake in joint-naval exercise, thereby rankling Washington (and Tokyo). Clearly, the Australians refuse to stand up in any meaningful way against the Chinese.

Closer to the Syrian area of operation, the Chinese seek to shore up their ties with oil-producing Iran, and, given that China is set to become the world’s largest consumer of oil, Beijing wants to have a greater hand in shaping the outcome of events in the wider Middle East (thus far, an American “playground”).

Syria’s proximity to Europe is also beneficial because the Chinese are seeking to not only tie together as much of Eurasia as possible through trade, but they want to do so in a way that a) undermines the influence of the United States and b) reduces the military threat the United States poses to Chinese interests.

And, the Europeans, much like the Australians, are less disposed to standing strong with the United States on the issue of China than most democratic globalists in Washington, D.C. (all of whom are thoroughly–blindly–committed to the transatlantic alliance) care to acknowledge.

This is evidenced by Germany (the de facto head of the European Union) serving as a major exit point for the Belt-and-Road Initiative in Europe. China not only wants to rollback American influence across the whole of Eurasia, but they also want to box us out of the resource-rich Eurasia zone.

Hell, the Chinese are making moves to gain access to Greenland in order to buttress their, frankly, absurd claims to being an Arctic nation (it’s all about those resources, baby–and the Arctic is chock full of ’em!).

Whether the Chinese do ultimately move in militarily to Syria or not, at some point, the Chinese will begin having increased influence throughout the Greater Middle East. In the case of Syria, it is less about Bashar al-Assad and more about gaining direct access to the Mediterranean and the European markets beyond.

Therefore, it’s best to look at a map of Eurasia from Beijing’s perspective. Looking out to Beijing’s west, China’s arc of influence will extend from the east coast of Eurasia and move–ever so narrowly–into a spear-like formation across Eurasia, until the pointed end comprises Europe.

Thus, we are witnessing the rise of a new, global Chinese empire. Many doubt it will come to fruition. I hope they’re right.

However, we should proceed as if China will obtain some semblance of its goals–if only because Beijing has acted so assiduously to accomplish that which it has set out to do: rehabilitate its power base; displace the United States globally; and become the world’s ba (hegemon).