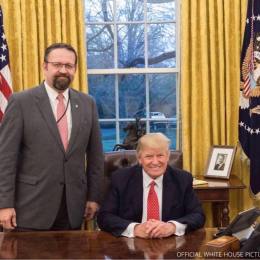 Today, Dr. Sebastian Gorka – recently appointed to a high-level Counter-Terrorism position in the Trump administration – was the subject of an  in-depth Politico profile.

Over the weekend I read Dr. Gorka’s 2016 book and will review in this post.

Defeating Jihad: The Winnable War is an important text that I highly recommend.  If the recommendations are only generally followed it is still a good sign for US national security. Here are the broad takeaways about what we can extrapolate about the new administration’s CT approach:

I. DEFINING THE PROBLEM

(1) Violent Jihadism placed in the context of  Islamic history:

Chapter 2 “The Story of Jihad” merits close reading as Dr. Gorka (correctly) places militant Islamism in the context of the broader history of Islam.

The main takeaway here that readers should draw is that violent Islamism is not some sudden and inexplicable development that appeared out of the blue. The reaction and pushback against a modern (Christian dominated world) has been happening for at least 150 years in the Muslim world. The violent Jihadism of the last 30 or so years falls squarely within the context of that historical trend.

Having lived in the Middle East for seven years, this isn’t a particularly controversial statement there, the way it is in certain academic circles in the US.

(2)  Jihadism as a Totalitarian Ideology – Similar to Communism

Professor Gorka makes a useful comparison between Jihadism and Communism, referencing George Kennan, a famous US diplomat whose 1948 “Long Telegram” provided the intellectual framework for confronting the spread of Soviet Communism throughout the Cold War:

Jihadists unquestionably have the same aspirations to global dominance as the Communists did.  They are every bit as totalitarian and anti-democratic. Whether they will ever reach that level of power, is another question, but they certainly aspire to.

Another important point. In the age of the Internet-era surveillance state, my view is that traditional 1990s era Al-Qaeda type terrorist groups are no longer able to exist at least not transnationally. As I wrote in the 19 book – Beating Jihadism Reading List– I highly recommend “Leaderless Jihad” – the classic book by Marc Sageman for more on this point.

The future is ISIS-style decentralized, Anarchic-insurgent models of terrorism.

Nathan Field is an Arabic speaker and a commentator on Middle East politics based in Washington, D.C.  He spent two years as part of the management team of a one billion dollar engineering project in Saudi Arabia. He then spent five years building up and then selling a translation company called Industry Arabic. Follow him on Twitter at @nathanrfield1. Check out his website, www.nathan-field.com for expert, in-depth, and entirely unique perspectives on resolving so many of our most vexing problems in the Mideast today.

View all posts by Nathan